I admit that that writing about Six Feet Under now, nearly eight years after it was taken off the air, may be a somewhat redundant undertaking (no pun intended). However, at the time the series hit the screens in the US, and subsequently across the globe, and was swiftly met with wide acclaim, I was unable to watch it for personal reasons. I was afflicted at the time, with a strange condition, an obsession, a fear of death, or to be more precise: I was haunted by the constant presence of death, so to speak, by the awareness that death may occur at any given moment, and that there was nothing I could do about it.

Though I'd never seen Six Feet Under, I was well aware that death - in all its shapes and sizes - was very much its predominant theme, and watching it in the condition I was in would only have aggravated it. As a result, I had to skip the whole thing, however, watching it now, now that I've overcome my irrational fear of death, more or less at peace with the fact that it simply is something that's out of my hands, it's suddenly dawned on me what I've missed. But thanks to modern technology, I'm able to catch up!

The reason why I decided to write about Six Feet Under today, years after the fact, so to speak, and with its brilliance having been widely praised and lauded, is simply because I myself needed to go somewhere with my emotions, as nothing I'd read about it prepared me for the real experience. Rarely, if ever, have I seen characters on screen that are so three-dimensional, in other words: so real, so alive, so multi-faceted, so torn, as in Six Feet Under. Every character, even the ones you thought you'd hate, have some redeeming quality. Every single one of them moves in a sort of grey area with the occasional shift into the whites or, depending on the event, into the black. But no character is just one or the other. This is one of the reasons why they offer so much room for identification. It does help, of course, that the actors portraying them more than live up to their task. This is especially true in the cases of Frances Conroy, Lauren Ambrose, Michael C. Hall, and Rachel Griffiths. They really make you forget that you're watching a film. And I deliberately employ the term film here, for Six Feet Under is much more than ordinary TV series, even by HBO standards.

I knew that Alan Ball was the initial creator of Six Feet Under, and it doesn't take much to detect parallels with American Beauty, which he scripted, based on his original idea. Some of the characters of American Beauty even have an afterlife in Six Feet Under. For instance, Alison Janney's Barbara Fitts has a lot in common with Six Feet Under's Ruth Fisher. On the same token, Thora Birch's Jane has her equal in Six Feet Under's Claire. And even the opening sequence bears some resemblance to that of American Beauty - think of the wilting flowers - and the same goes for its score. Moreover, the overall topics of both films are similar as by and large they concern, simply put, life and death and how we deal with the one and confront the other.

The location, too, bears some resemblance to American Beauty. Although in American Beauty the location is never disclosed, set as it is, in Anywhere, USA, the same could be said about Six Feet Under with the one difference that we know, that LA is where it's set. That said, however, I have never come across a film or television series that looks less LA than Six Feet Under. It is so stripped of any glamour, so down to earth, and hardly ever are any of the things that we've come to associate with Southern California mentioned: no one visits a gym, no one has plastic surgery, no one attends drama school or wants to become an actor, and apart from Catherine O'Hara's character (which doesn't appear until well into season 2 and by season 4, is fully out of the picture), no one works in the movies. This non-stereotypical approach is a case in point for the series' creators refusal to bend to any clichés or stereotypes, defying them on every level, which is another reason that puts Six Feet Under in a league of its own.

Speaking of Catherina O'Hara's character, however, it needs to be mentioned that she's part of a string of female characters in Six Feet Under who, in the hands of lesser writers, may have ended up as caricatures but who are, in fact, fully fleshed out, if slightly on the camp side, women-on-the-verge-of-a-nervous-breakdown who add some comic relief to the series otherwise more or less grave (pun intended) narrative. These women also include Bettina (played by the incomparable Kathy Bates), Mitzy Dalton Huntley (unforgettably portrayed, replete with a thick Texan accent, by Julie White, an actress who's been shamefully ignored by the Big Screen, never mind that she's got oomph and  talent to boot!), and Dina Spybey's Tracy Montrose Blair, who out of sheer loneliness attends funerals of people she never even knew and who's constantly on the search of a suitable husband. 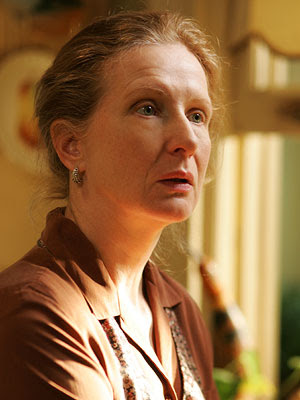 Frances Conroy as Ruth Fisher: probably the most complex of all of Six Feet Under's complex characters. She's as prim and proper as she's full of contradictions and unexpected reactions, as loveable as she can be annoying. 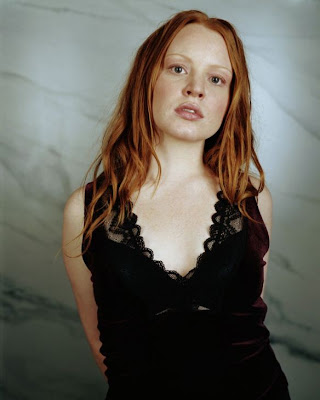 Lauren Ambrose as Claire Fisher: 17 years old at the start of the series, Lauren's character is undergoing  some crucial changes throughout the 5 seasons Six Feet Under lasted. From an angry young girl, Claire mutates and matures into an intelligent woman who thinks outside the box, ready to brave whatever life's got in store for her. 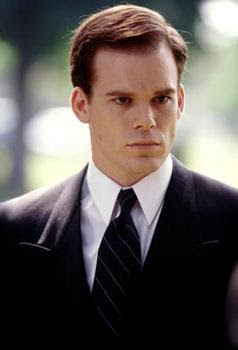 Michael C. Hall as David Fisher: still more or less in the closet in season one, David's very much his mother's son but also goes through some major changes, triggered by a series of events starting with the demise of his father. 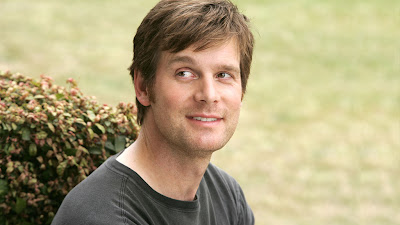 Peter Krause as Nathaniel (Nate) Fisher: described once as "the series most spiritual character", Nate really is constantly on the search for, what lack of a better term, is best circumscribed as the meaning of life. Trying to make sense of it all, he goes from vaguely believing in some God to toying with Quakerism at the series end - and his. 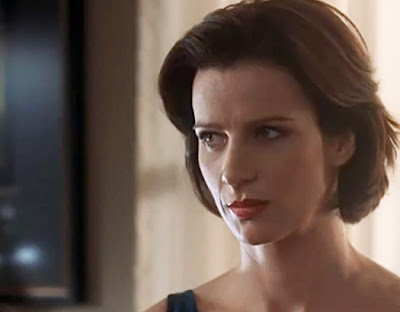 Rachel Griffiths as Brenda Chenowith: Nate's on-and-off girlfriend before they finally tie the knot, she's psychologically scarred by her parents, who are both shrinks (!). Brenda's got a disturbed brother, Billy, with whom she shares a relationship that's bordering on the incestuous. No surprise, then, that she also has serious commitment issues which are only slowly resolved, and when they are - it's too late. 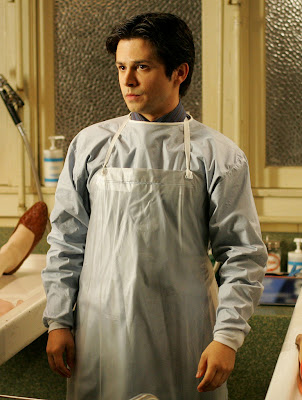 Freddy Rodriguez as Rico: A member of LA's huge Latin community, Rico's been put through mortuary school by Nathan Fisher Senior, whom we only get to know as a sort of ghost, as he's the first of Six Feet Under's many fatalities. An employee at first, Rico is eventually being made a partner by Nate Junior and David, changing the name of their funeral home from Fisher and Sons to Fisher and Diaz. 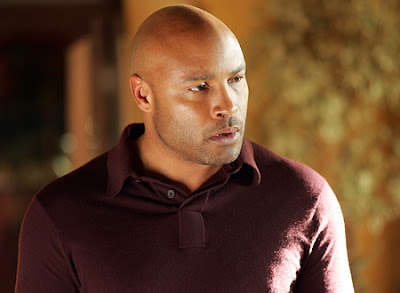 Mathew St. Patrick as Keith: David's partner, a gay cop, with serious anger management issues which more than once get in the way of his life and career over the course of the series.

Needless to say, with Six Feet Under spanning several years - in reality as well as on screen - the character development could be taken a great deal further than in American Beauty. And unlike most films or television series of today, Six Feet Under is more character driven rather than plot driven, and that precisely is something else that makes this series so uniquely outstanding, for each and every one of the principal characters develops organically, which is to say realistically and comprehensibly, and whatever happens to them happens to them for a valid reason, as it were, a reason which is equally realistic as it is comprehensible, always making sense within the context of the overall narrative. In Six Feet Under, a character's reaction is never out of character. And where a more conventional television show would have opted for the unexpected just for the sake of the ratings - Six Feet Under successfully avoids that approach throughout its whole run, always keeping it credible and in keeping with the character.

The same goes for the use of graphic violence whose inclusion nowadays is seen as must in order to get  enough people to care to even turn on the telly. But here, too, the writers never deviated from the unconventional path they chose to take. The few times violence does occur, it may occasionally be suffused with black humour, but it is never gratuitous or exploitative.

Something else that deserves to be pointed out is the taboo breaking nature of the series, touching, as it did, on well nigh every existing television no-go from female masturbation to abortion to the war in Iraq, not just in American television, but in television as a whole. And even topics that are not exactly tabooed such as gay marriage or the right for gays to adopt children or the consumption of drugs, are tackled in the same tasteful and realistic manner as everything else. Never just in an overt politically correct way, let alone in a simplified black and white one, but rather such that it effortlessly blends into the overall narrative.

The last episode of Six Feet Under has been widely praised as being one of the best finales in television ever. It reminded me of Michael Cunningham's novel Flesh and Blood, in which Cunningham also reaches way ahead into the future to let the reader know what life has in store for his characters in the years to come and how and when exactly they will meet their maker. As such, the series' last episode very much ties in with the theme of Six Feet Under as a whole - death - which, when it comes, is when we're all confronted with the one question that's forever hovering above us: how we lived our lives and if it was worth our while - and that of the ones around us.
Posted by Martin at 22:00

Initially conceived as a daily blog on all things film related, FILM-TALK's focus eventually shifted, now revolving primarily on American films and film history. Feel free to also check out my other blog, THE BERLIN FLANEUR (http://berlin-flaneur.blogspot.de/), and to contact me, you can do so via berlin_tours@btinternet.com 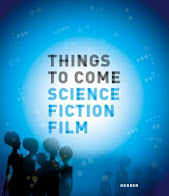 Links To Check Out: